While digging in to stories about Easter in Germany, I frequently come across references to the Germanic pagan goddess Ostara. In fact, Ostara and Easter appear to be so entwined, that even the word Ostern (Easter) comes from this goddess of Spring. And sources attribute many of the non-religious Easter symbols like eggs and rabbits directly to her. So, I thought HA! the perfect thing to write about! Ostara and Easter!

But… here’s the problem. There really aren’t any old legends written about Ostara/Ostera/Eostera. In fact, there’s barely anything at all.

While some of the Germanic Pantheon may be lost to the mists of time, are still remembered in stories. Hulda/Frau Holle appears in legends and Fairy Tales… Perchta/Berchta stories and practices go way back… Woden shows up again in Nordic Sagas, and I own an entire book of Rübezahl, the lord of the Mountains stories. But no one ever wrote down the Ostara stories. She gets little mention in Germanic history before 1800. And in fact, there are many arguments between historians and folklorists about Ostara. (And I’ve got to tell you….reading arguments between historians and folklorists is the special kind of fun best tackled with a glass of wine). Who IS Ostara? Pagan goddess? A misinterpretation? A modern invention of the German Romantic movement?

Let’s try to sort this out.

Much of how we know Ostara today comes from Jacob Grimm. (The same Grimm, who along with his brother, Wilhelm, collected and wrote the famous, “Kinder- und Hausmärchen” or Grimm’s Fairy Tales. In his 1835 book, “Deutsche Mythologie”, Jacob Grimm called Ostara, “the Divinity of the Radiant Dawn”. (Isn’t that beautiful?) Grimm then goes on to say, Ostara brings joy and blessings to all in the Spring. She is the first warm Spring wind that carries with it migratory birds. According to him, the Easter Fires were lit in her honor to banish the darkness. And Easter Water, with it’s special healing properties, were a gift from Ostara who appears as a maiden dressed in white wearing a wreath of flowers.

Most importantly, Grimm claimed that Easter is named for her.

Grimm also connects Ostara to brightly colored Easter Eggs, saying that colorful eggs were hung on trees to resemble the bright colored blossoms that a appeared in her wake.

19th century images of Ostara usually show her accompanied by a hare, a symbol of Springtime and fertility. The painting “Ostara” by Johannes Gehrts in 1884, was recreated as a Xylograph by Eduarde Ade in 1901, and is the standard for how we see her. She’s dressed in all in white, and surrounded by birds and cherubs, naturally a hare runs by her side… and early Germanic people look up in awe at her radiance. She even carries a staff of Spring flowers and leaves (that looks very similar to the Palmbuschen carried on Palm Sunday).

The Mystery of Ostara

The problem for most folklorists and historians is lack of stories, and difficulties with linguistic roots (a complex topic far too involved for this post… but I do recommend it as an insomnia cure). Granted, early Germanic people didn’t write things down, but the story telling tradition was fairly strong. Usually tales remained and were passed along. For example, I grew up hearing the stories of Frau Holle, and how she made it snow. The story is even in Grimm’s Fairy Tales. Frau Holle started out her existence as the pagan goddess Hulda, and the stories shifted as the years passed. But Ostara doesn’t have that sort of story. No legends and no Fairy Tales seem to exist about her.

But in a way, her name does show up. According to the Old Germanic Calendar, the month of April was known as Ōstarmānod. Springtime and lengthening days were an important time for people who had just survived a cold dark winter and were looking for the sun to warm the earth again.

Ostara gets her first mention by name in the 8th century. According to the Venerable Bede in 725 CE, while referring to the pagan Anglo Saxons (whose ancestors traveled over from Germany to England bringing their pagan religion along) “Eosturmonath…. once called after a goddess of theirs named Eostre, in whose honor feasts were celebrated in that month. Now they designate that Paschal (Easter) season by her name, calling the joys of the new rite by the time-honoured name of the old observance” He goes on to claim that festivals were held for her in the Spring. And that they lit fires in her honor. (side note- Paschal is an old name for Easter, and relates to the Hebrew word for Passover).

Just a few years after this, the name comes up again. The monk Einhard, describing how Charlemagne, the Holy Roman Emperor from 742-814 CE, defeats the Saxons in Germany, and converts them to Christianity. After doing this, the Holy Roman Emperor renames the months from their names Latin names to more Germanic ones, and he names April, Ostaramonth. Einhard’s chronicles of Charlemagne, also describe the tradition of Osteräder (Easter Wheels). According to Einhard, Charlemagne was in Lügde, where large oak wheels were stuffed with straw, set on fire, and sent rolling down the Osterberg to greet the Spring. Although no one knows how long ago the practice started, this once pagan tradition got the approval of Charlemagne, because Christian inscriptions were now being written on the wheels.

Years later, while Grimm sifted and sorted stories for his Deutsche Mythology, he most likely came across Bede’s writings, and took them at face value. Equating Ostara with Eostre. From there he made the claim that Ostara is the source of the word Ostern and Easter.

Was Ostara just the name of a month? Did Bede misunderstand what the celebrations were about? Did Grimm then take the ball and run with it (maybe in the wrong direction?)

Grimm and his brother were a strong force behind the German Romantic Nationalist Movement. According to Joe Leerssen, the definition of Romantic nationalism “is the celebration of the nation (defined by its language, history, and cultural character) as an inspiring ideal for artistic expression.” Basically, art, literature, and music give us a common cultural identity, and unite us as one people. In this post Napoleonic era in Germany, a sense of pride for the German people as a whole, not just as individual states developed, and a movement to unite Germany as a nation started taking root. Writers, composers, and painters developed a new distinctly German style. Folklore finds its roots in Romanticism. Where once were stories were told around a fire, now stories were collected, written down, and given ethnic roots. Our stories are what gives us a National Identity. The Grimm Brothers wrote German Fairy tales. And so it’s logical that Jacob would see Ostara’s roots as German.

And once Grimm published his book of mythology, ever more folklorists and scholars joined in.

The Hare is first associated with Ostara by Adolph Holtzman in HIS book “Deutsche Mythology”. And by 1883, KA Oberle, tells the story of why the Easter Hare lays eggs. According to him, the Hare began life as a bird, but Ostara transformed the poor thing into a bird. Because the hare missed his old life so much, Ostara allowed him to lay colorful eggs one day a year in memory. (Personally, I think the hare would have been happier with wings…). 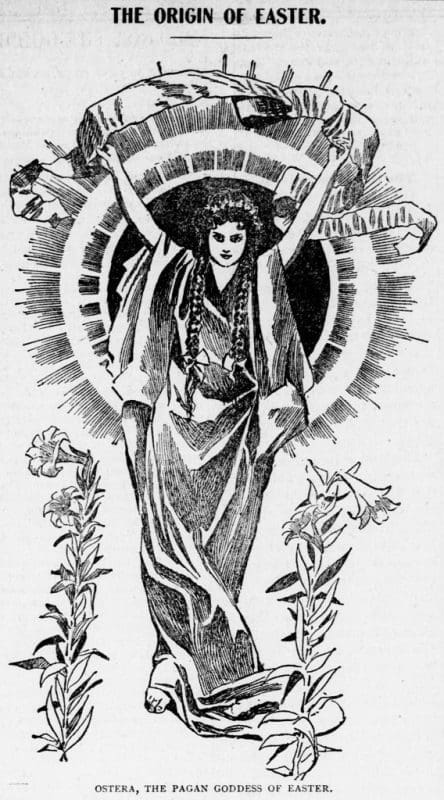 Stories of goddess Ostara spread. She even turns up in newspaper articles in the United States! The Valentine Democrat, a Nebraska newspaper dated April 9, 1903 (with a lovely picture) writes “Ostera was worshiped very generally in northern Germany, and it is believed that the fame of the goddess spread to England, where the Saxons joined in worshiping her . Until the beginning of the present century court was paid to Ostera by the kindling of great bonfires and in other ways, and even to-day in some of the remote districts where many superstitious beliefs are treasured by the peasantry the fame of Ostera still lives. ” And like the Muhlenberg legend about German almost becoming the official language of the United States, the myth grew stronger.

Today, it’s accepted that the Christian celebration of Easter got its name from a Germanic pagan goddess.

What do you think?

What begins as a story about a beautiful and radiant pagan goddess ends as a story about German pride and nationalism. Grimm may have taken Bede’s few words and created a myth, but it’s our myth. Perhaps Germanic people once did worship the goddess Ostara, and she was just forgotten for a bit. Ōstar-mānod existed in the Germanic calendar and the fires burned to banish darkness and welcome Spring. Eggs and Hares, have been symbols of springtime and fertility since before St Boniface and Charlemagne converted Germans to Christianity. Perhaps, the legend of Ostara swelled in the past 200 years, but maybe somewhere behind it all Once upon a time, there was a”divinity of the radiant dawn.

From Easter to Ostara: the Reinvention of a Pagan Goddess? by Richard Sermon

Romanticism
Ostara and the Hare