Beer is one of the oldest Beverages that humans make. But it hasn’t always been the clean refreshing beverage enjoyed around the world. The Sumerians, baked bread loaves called bappir, that were put into water to begin fermentation. Egypt based its economy on bread and beer, building massive grain storage. Certainly, drinking this beer was healthier than drinking the water… but it needed to be drunk through a straw, to avoid the solids at the bottom of the drinking vessel.

The Romans preferred wine to beer. But on the edges of the Roman frontier, they noticed the Germanic tribes fought for their lands fortified by beer. According to Pliny in his Natural History, “the populace of western Europe have a liquid with which they intoxicate themselves, made from grain and water.” Eventually, the Roman Empire crumbled, and the Germanic people continued to brew (there might be a lesson there).

People brewed at home for personal consumption, and women sold extra beer to neighbors for income. Monasteries brewed beer for their monks, and sold the excess to travelers. Beer was big business.

Through the ages, beer recipes have been rather, um… flexible. And some beer makers took advantage of that by making beer (or something resembling beer) with surprising additives like nettles, wormwood or belladonna. Even after Hildegard of Bingen wrote how Hops benefits the results of beer by making it last longer, people STILL cut corners and made some fairly awful stuff.

Finally, on April 23, 1516, Duke William IV of Bavaria instituted the Reinheitsgebot. The law is mostly known for limiting Beer recipes to THREE ingredients, Hops, Barley, and Water. You may notice that Yeast is missing from the list, but at the time its wasn’t added to beer, and its role in fermentation was still unknown. Louis Pasteur worked out the importance of yeast in brewing in 1857… and finally in 1906, the Reinheitsgebot was amended to allow yeast.

But it wasn’t just the contents of beer that were regulated, it was the prices. In fact, the PRICES for beer, and punishment for overcharging seem to be more important.

English translation of the Reinheitsgebot (German Purity Law) adopted in 1516

“We hereby proclaim and decree, by the Authority of our Province, that henceforth in the Duchy of Bavaria, in the country as well as in the cities and marketplaces, the following rules apply to the sale of beer:
“From Michaelmas to Georgia, the price for one Mass [Bavarian Liter 1,069] or one Kopf [bowl-shaped container for fluids, not quite one Mass]is not to exceed one Pfennig Munich value, and

“From Georgi to Michaelmas, the Mass shall not be sold for more than two Pfennig of the same value, the Kopf not more than three Heller [Heller usually one-half Pfennig].

“If this not be adhered to, the punishment stated below shall be administered.

“Should any person brew, or otherwise have, other beer than March beer, it is not to be sold any higher than one Pfennig per Mass.

“Furthermore, we wish to emphasize that in the future in all cities, markets and in the country, the only ingredients used for the brewing of beer must be Barley, Hops and Water. Whosoever knowingly disregards or transgresses upon this ordinance, shall be punished by the court authorities’ confiscating such barrels of beer, without fail.

“Should, however, an innkeeper in the country, city or markets buy two or three pails of beer (containing 60 Mass) and sell it again to the common peasantry, he alone shall be permitted to charge one Heller more for the Mass of the Kopf, than mentioned above. Furthermore, there should arise a scarcity and consequent price increase of the barley (also considering that the times of harvest differ, due to location), WE, the Bavarian Duchy, shall have the right to order curtailments for the good of all concerned.”

Within a few years exceptions were made for Wheat (how else could a Hefeweizen exist?)

Not the First Beer Purity Law

Beer purity laws have been around. (The Bavarian Beer Purity law just had a better marketing team) 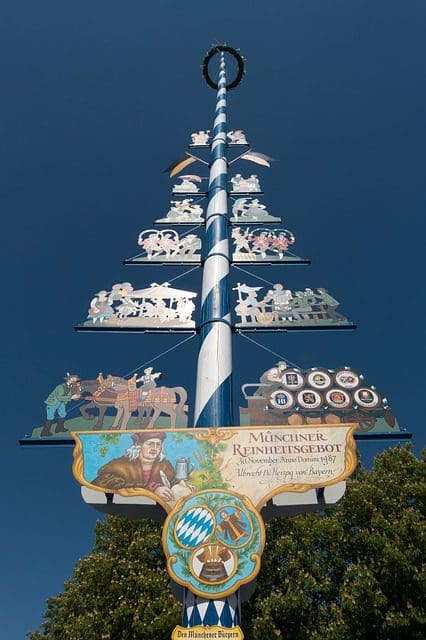 If you look closely at a German Beer Bottle, you may notice the words German Reinheitsgebot instead of Bavarian Reinheitsgebot. Remember, Germany wasn’t an unified country until 1871. Then in 1872, the Gesetz wegen Erhebung der Brausteuer or Beer Taxation law includes sweeteners like cane sugar and colorants from sugars.

Today, exceptions to the Reinheitsgebot are made for certain top-fermented beers, craft beers, and beers made for export. And since 1906, Yeast has been an allowable ingredient. In 1987, the European court ruled that beers imported to Germany did not have to adhere to the Purity Laws, and that German Beers brewed for export were also allowed to add other ingredients (presumably to preserve the beer on its long journey out of the country ). But to this day… Bavarian Beer, brewed in Bavaria, sticks to its roots, brewing beer that follows the Bavarian Purity Law. So on April 23rd… head to your favorite Bavarian Biergarten, and enjoy a brewed Bier under one of the oldest still functioning Reinheitsgebot.

Wheat Beer and the Reinheitsgebot