There’s a good reason why all Germans carry an Allwetterjacke (all weather jacket), German weather can fool you. One moment you bask under a warm sun in the local Biergarten, and the next you need to pull on your sweater. Especially in May, when after a long Winter of cold weather everyone seeks the sun. But, just because the sun is shining, farmers, hobby gardeners, and my Oma all know… No planting until AFTER the Eisheiligen days pass! Those German Ice Saints of May have nothing at all to do with Ice Cream. Instead they bring a last blast of cold air that kill young plants overnight, even when the days felt warm. Who are the Eisheiligen in Germany? And where did these rules come from? These 5 days of May get their name from the 5 Saints days that fall from May 11 until the 15th. The Bauernregeln (Farmer’s Rules/Expressions) remind everyone that although the sun is shining… cold is still in the air.

Sometime during the Middle Ages, Bauernregeln about mid-May planting circulated. Bauernregeln (Farmer’s Rules) covered all aspects of farming. When to plant, when to harvest, how to determine coming weather patterns. Think of them as an oral Farmers Almanac.(Groundhog’s Day arrived in the United States with German immigrants who looked to see how much longer Winter would last after Maria Lichtmess, February 2nd). The Eisheiligen of Mid-May were nights that would likely freeze, despite warm daytime. Waiting until after these five days (or three days in the Southern regions) to plant crops and garden vegetables insured a your wouldn’t be lost to frost before it had a chance to establish.

But WHY not just say… “Don’t plant before May 11”? Once upon a time, the church organized the calendar by giving every Saint a specific day (by their birth or death). Your average person didn’t have a calendar hanging on the refrigerator, and Saints names had more personal meaning. (Keep in mind, the Catholic Church held a great deal of power, and there weren’t yet Protestant churches or other Christian groups that might have a different idea about venerating Saints and Martyrs.) This explains why New Year’s Eve and Silvester in Germany are interchangeable, Pope Silvester died on December 31, and it’s his Saint’s day.

Of course, when the Julien Calendar shifted to the Gregorian Calendar, everything got shifted by 13 days, throwing the Saint’s days into confusion. Theoretically, the date shift meant that the Eisheilgen days were off by over a week. But since everyone already memorized the rules, the farmers collectively agreed to just leave it alone. Adding to the drama, in 1969 Bonifatius’s story came into question, and he lost his place in the calendar of saints. Nevermind. We still count him as an Eisheiligen.

The Five Eisheiligen or Ice Saints

The four men and one woman who make up the Eisheiligen are an interesting group. Northern German Catholics count Mamertus as the first Ice Saint, in the South they begin with Pankratius. Cold Sophie appears on the lists much later, and gives the group a firm end date.

It’s interesting that a few of these Saints are Patron Saint of frost, disaster, and plants. Almost as if it was pre-planned…. 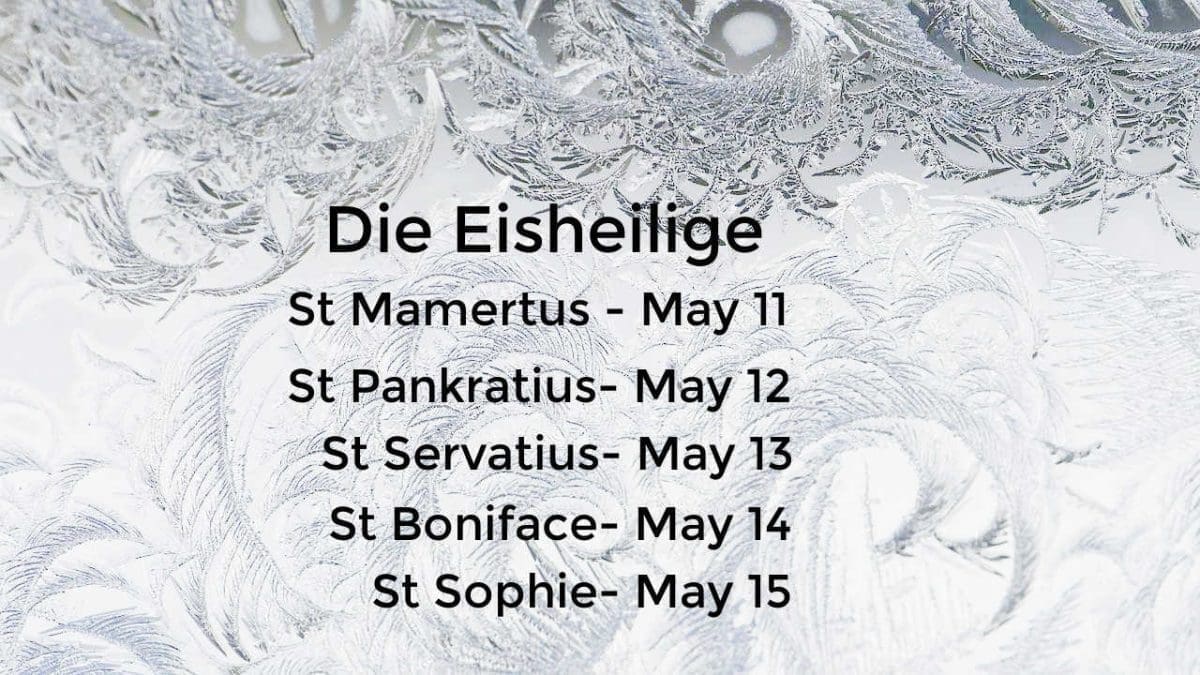 Born around 400, Mamertus later became the Archbishop of Vienne Gaul before he died in 477. During his life he created many parts of liturgy for the Church.
Mamertus rescued his district from famine and disaster with a miracle, so he is considered the Saint of Earthquakes and other disasters. (You also call on him for Chest Diseases and Fever)

“Wenn’s an Pankratz friert, wird im Garten viel ruiniert”
When Pankratz freezes, a lot of the garden is ruined

Pankratuis was born to a wealthy family in Phrygia (Turkey). After going to Rome, he felt sorry for persecuted Christians, so he tried to help them, and ultimately converted. For this he was beheaded and fed to dogs.
He is the patron saint of young seeds and blossoms. Because of his wealth, his statutes usually show him in fine clothing.

“Servaz muß vorbei sein, willst von Nachtfrost sicher sein“
Servaz must have passed, if you want to be safe from night frost” 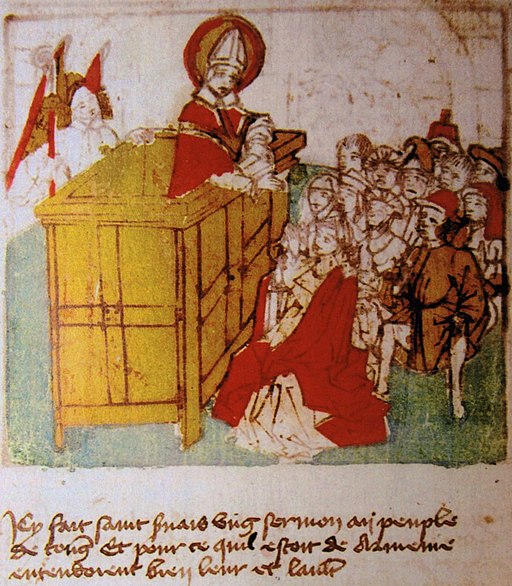 Born in 340, Servatius was thought to be a cousin (a few hundred years removed) from John the Baptist, and therefore a member of the Holy Family. When he foresaw the Hun invasion of Rome, he moved to Tongren on the Baltic Coast of Gaul where he became Archbishop (this area was inhabited by the first people that Tacitus labeled “Germani”). You will easily recognize statues of Servatius, because he always holds wooden shoes. Legend says that he was killed BY a wooden shoe! (I’ve worn them, they are uncomfortable)
Servatius is the patron saint of Frost Damage (makes sense for an Eisheiligen), foot problems (makes sense for a guy killed by a shoe), rheumatism, and plagues of rats. 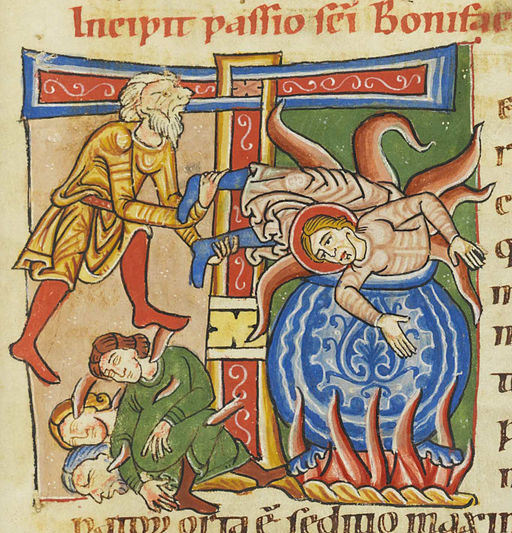 Martyrdom of St Bonifatius, either an unknown master or „Frater Rufillus“, Public domain, via Wikimedia Commons
Bonifatius was born around 306 CE in Rome, and he didn’t start out as a Christian, he started as a Relic Hunter! (Think Toga wearing Indiana Jones!). After seeing how the Romans persecuted Christians, he converted, and ended up being a very early Martyr. (The Romans boiled him in tar). Sadly, the name Boniface wasn’t uncommon, and no one quite knew if the story about him was true (or if it was another Boniface?)… so the Church took him off the saint’s list.
All imagery of Boniface/Bonifatius shows a man being showered in bad luck. 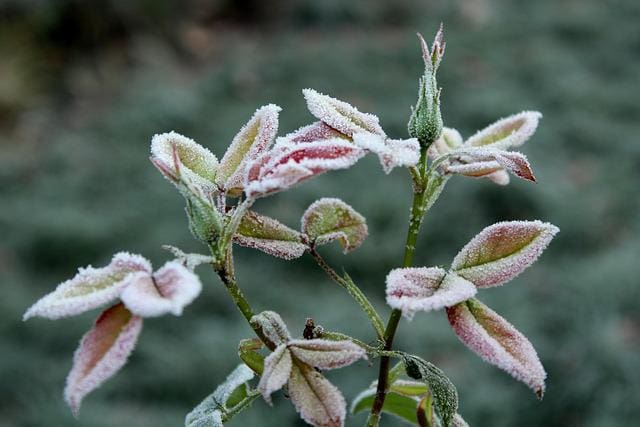 st. Sophia of Rome died in 304, an early Virgin Martyr under Diocletian. She’s known as Cold Sophie or even Pissing Sophie (because of rain). People do confuse her with the many other Sophies, including St Sophia of Milan, Galatia, or Minden… Her relics are in the Alsace, and she’s better known in Germany as an Ice Saint than in Rome.
Sophie is invoked against late frosts.

Is weather REALLY Colder until After the Eisheiligen?

“Mamertius, Pankratius, Servatius bringen oft Kälte und Verdruss“
Mamertus, Pankratius, Servatius often bring cold and annoyance
Students of Galileo conducted a lengthy study of the world around them, and determined that YES. Cold snaps appeared during these 5 days. And weather records from the 19th and 20th century do show cold periods during that time in May. Although it’s not scientifically proven, modern Meteorologists point out that there really is something to it. Right around the time of the Eisheiligen, changing seasons causes cold polar air to flow south to the Alps. So yes, it’s entirely possible that the Eisheiligen bring with them one last blast of cold to Central Europe.

True of not, if you live in Germany, it probably wouldn’t hurt to wait another day to set out seedlings. How about the feast day for St Honoratus, the patron Saint of Bakers? His relics are used to promote good wheat harvest… so it’s a perfect day to plant!